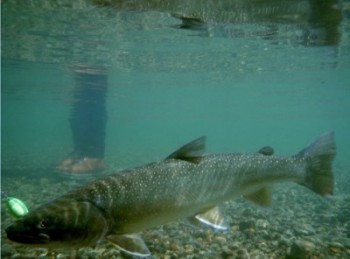 What do you get when you put 80-plus fish specialists and managers in the back country without cell service, wifi, or any ability whatsoever to connect to their day jobs for three days?  You get innovative and forward-thinking presentations that carry over to lengthy and diverse campfire discussions where nothing but Bull Trout is on the mind. CEC was invited by our colleague Tom Boag, of Applied Aquatics Research Ltd. to attend the 25th Annual ScCS Annual Meeting (October 7-9, 2014).  We joined representatives from various federal and provincial government organizations and consulting firms who had traveled from all over Canada and the Western USA, to gather at a remote lodge on Blue Lake, in the B.C. East Kootenays.  The meeting was a melting pot of presentation topics and attendees which encouraged a good deal of interesting conversation all centered on Bull Trout.

Bull Trout: A Trans-boundary Species
Canadian populations extend from western Alberta throughout most of British Columbia, with a northern limit into the southern Yukon and the central portion of the Northwest Territories. In the United States, they are found from northern Nevada through Oregon, Idaho, Montana, and Washington. This range necessitates an open conversation across the borderline.  “Trans-boundary Core [Habitat] Areas” have been identified within Bull Trout range (link Revised Draft Recovery Plan for the Coterminous United States Population of Bull Trout , USFWS 2014). Over the 14 presentations, many of them were the result of collaborative efforts between specialists in Canada and the USA through sharing of ideas, experiences, data, and methodologies.  A success story of its own.

A key learning we all took away from this meeting is that there is still a good deal to learn on managing Bull Trout.  No one population of Bull Trout can be treated the same.

Bull Trout Quick Facts
Bull Trout are a cold water dependent species that thrive in pristine watersheds and are slow growing and slow to reproduce. Combining their inherent biological sensitivities with anthropogenic threats to survival, Bull Trout are in decline across their range.  These threats include:

In effort to manage the threats to Bull Trout, in Canada, they are listed as a Species of Special Concern (COSEWIC), and under consideration for listing as Species of Concern (federal Species at Risk Act).  In the USA Bull Trout are listed as Threatened (Endangered Species Act).  Bull Trout are regulated in many ways, such as non-retention in all Alberta waters, the use as single barbless hooks in all BC streams and many permanent and seasonal stream closures for Bull Trout.

Here are some Canadian regulations.  Be sure to find those for your region.

Can You Spot the Difference? Do you know the difference between a Bull Trout, Dolly Varden, Arctic Char, and a Brook Trout? They are all members of the Char family and at first glance, they look similar, especially with all of those spots.  But there are some distinct features that indicate they are definitely separate species.  Fishing regulations differ for each species, so be sure you know which fish is which. Bull Trout are found throughout the Pacific Northwest from Nevada to the Yukon and Northwest Territories. It is a cold-water (usually <18℃) species found in lakes, streams and rivers from sea level to mountainous areas. Dolly Varden have an elongated and moderately compressed body. In their marine phase, they have a dark blue or olive-coloured back, silvery sides and a white belly. The head is blunt and rounded.  Like all char they have light coloured yellow, pink or orange spots on a dark background.

In the eastern Pacific they range from the Bering Sea to Washington State. In the northwest they range from Siberia to Japan and the Korean Peninsula. They inhabit coastal streams and lakes, although in Canada they are found throughout the Skeena and Stikine Rivers and in isolated and landlocked populations in the headwaters of the Liard, Peace and Fraser Rivers. Arctic Char vary tremendously in colour depending on time of year, location and development stage. Usually, they will have a dark-coloured back (a dark blue, brown, or green) with silverish sides and a white belly. Their sides and backs are sometimes covered with violet-pink or reddish spots. When spawning, char often take on a brilliant red or orange colour.

RANGE: Arctic char are distributed across the Canadian Arctic Ocean including around the islands of the Arctic Archipelago. While this species may also be found in many rivers and lakes located in Canada’s Far North. An introduced species throughout the Pacific Northwest, they are native to Eastern Canada and Eastern USA.  They have a wavy spots on the dorsal fin and the lower fins have white leading edges bordered by black.  The spots on the body can be orange and reddish in colour with blue halos.

Get involved with the Salvenlinus confluentus Curiosity Society (ScCS).  Check them out and keep in touch with future ScCS events on their Facebook page here.

Check out CEC’s Resources Page for useful fish-links, as well as links to SARA, COSEWIC and Fisheries and Oceans Canada.

Have you ever caught a Bull Trout?

Are you working on a project studying Bull Trout?