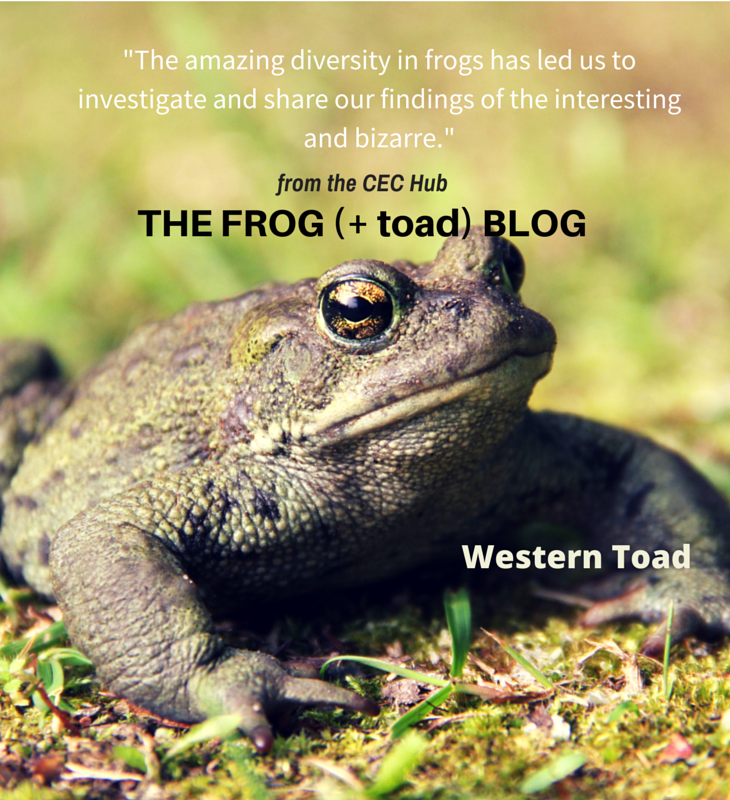 April is National Frog Month and here at CEC we think frogs and toads are pretty cool little critters especially when you think that they have been around for 200 million years and there are more than 6,000 species worldwide.

Obviously they are survivors and have developed an amazing array of adaptations.  They occur in almost all regions of the planet including alpine areas, the Arctic and even deserts. Antarctica is the only continent on earth where there are no frogs or toads. Here in the Okanagan where it is very dry and hot (>30 degrees Celsius for several months) we wonder how water-dependent frogs survive when water sources dry up and how they can make a living in other hostile environments.  The amazing diversity in frogs has led us to investigate and share our findings of the interesting and bizarre, both at home here in British Columbia (BC) and around the planet.

QUIZ! Think you know some stuff about frogs? See if you can answer these questions before checking the answers.

Frogs can drown if their lungs fill with water or if there is not enough dissolved oxygen in the water.

What do you call a group of frogs or toads? ANSWER  Show More

A frog completely sheds its skin about once a week. After it pulls off the old, dead skin, the frog usually eats it.

What is the smallest frog on the planet? ANSWER  Show More

The smallest frog (Paedophryne amauensis) at 8 mm (less than half the width of a dime) is from Papua, New Guinea.

What is the largest frog on the planet? ANSWER  Show More

The largest is the Goliath frog from South Africa which can grow to more than 1 foot in length and weigh 7 pounds.

In fact, frogs were the first land animals with vocal cords but only the male frog croaks. Some species whistle or chirp like a bird, some can be heard a mile away and some species make no sounds.

How many eggs do they lay and where? ANSWER Show More

Some frogs can lay as many as 20,000 eggs in frogspawn (jelly-like egg masses). The vast majority of frogs, and all of ours, lay their eggs in water, some frogs lay their eggs in leaf litter or above ground on vegetation, but all eggs must remain moist. In the Seychelles, there is a male frog that carries its young around on its back until they become adults. While the male Darwins Frog takes its mate’s eggs into its mouth as soon as they show signs of life and they stay there until they emerge as fully grown froglets.

What is the difference between frogs and toads? ANSWER  Show More

True toads (bufonids) are frogs, they are just a bit different in that they tend to have short legs and dry ‘warty’ skin, though there are plenty of frog species that fit this description as well. Toads also tend to have toxic secretions, but so do poison dart frogs.

Do they have eyelids? ANSWER  Show More

Frogs’ eyes come in all shapes and sizes. Some even have square or heart shaped pupils. But they only see in black or white.  They do have eyelids, and they also have a clear nictitating membrane, which allows them to protect their eyes without obstructing their vision.

How long do they live? ANSWER  Show More

The normal life span of frogs in the wild ranges from around 3 to 10 years, although they have been known to live more than 20 years in captivity.  Just like trees, frog bones form a ring each year when the frog is hibernating which can be counted to age the frog.

How do they survive the winter? ANSWER  Show More

When temperatures drop, many species overwinter on top of or slightly buried in the mud at the bottom of ponds, while some dig burrows and hibernate below the frost line where they remain completely still and scarcely breathing.  Wood frogs are the only North American frog that lives above the Arctic Circle and the only one that freezes solid during winter hibernation, or more accurately with 65% of its body frozen (glucose in its blood acts as a kind of antifreeze).  In hot, dry climates, frogs enter a state of estivation similar to hibernation. The Australian water-holding frog is a desert species that burrows underground and surrounds itself in a transparent cocoon made of its own shed skin and can remain inactive for up to seven years.

How far can they jump? ANSWER Show More

Australia’s Striped Rocket Frog can jump a distance equivalent to 55 times its body length. That would be like you jumping a football field. The Costa Rican flying tree frog has webbing between its toes that can extend out and help it glide between branches.

What do they eat? ANSWER  Show More

If you said “just about anything they can fit into their mouths” you would be correct although they will try and eat things larger than themselves. Frogs usually eat meat (bugs and worms) and swallow their food whole although they will eat anything from other frogs to snakes, small mammals and birds. Frogs are true predators and most will starve before they eat a dead insect or animal.

Frogs absorb water through their skin so they don’t need to drink. Frogs have been shown to absorb up to half their weight in water in an hour.

How long can they hold their breath underwater? ANSWER  Show More

That depends on the species and the amount of dissolved oxygen in the water. Most frogs can spend extended amounts of time underwater by absorbing oxygen through the skin and many species hibernate underwater. Frogs have no real lungs, ribs or a diaphragm but can swallow air into air sacs and absorb oxygen internally as a secondary means of respiration.

It seems that no one really knows. Frogs do rest and close their eyes but there is no real evidence they sleep. In fact it appears they remain in an alert state while resting.

What are the main threats to frogs? ANSWER  Show More

The causes for declines are varied but habitat loss and fragmentation are typically the lead causes.  Over the past few decades the spread of Chytrid fungus  has threatened populations and caused the extinction of many species around the world.  Species introductions can be very harmful. The introduction of cane toads, which can grow to weigh 4 pounds, has resulted in population declines and localized extirpations in native species of reptiles and mammals in Australia. The introduction of American Bullfrogs, which can weigh almost 2 pounds, into BC has resulted in the elimination of native frogs in areas where they have become abundant as they eat or outcompete them for breeding habitat.

Due to worldwide population declines, most frogs and toads have special conservation status.  Check out the worldwide database to learn about the species at risk and conservation efforts for frogs in your area at AmphibiaWeb.  In BC there are seven species of frogs with designated conservation status: Provincial Red and Blue lists, Federal Committee on the Status of Endangered Wildlife in Canada (COSEWIC) and Federal Species at Risk Act (SARA). Find out and be sure at BC Frogwatch.

How can we all help? ANSWER  Show More

Almost all frogs require open water for breeding, usually preferring shallow ponds that lack fish, and many frogs overwinter at the bottom of ponds.  The habitat surrounding waterbodies and other riparian habitats provide important habitat for adults during the non-breeding season.  Their survival and success is therefore dependent on how their habitat is functioning.  While they may divide their time between land and water, healthy water bodies are critical to their survival, and throughout the province these habitats are often threatened by human activities.

There are ways you can contribute to frog and toad survival, just by knowing a bit more about them.

In British Columbia there are 13 species of frogs, including 2 introduced species. The BC frogwatch website lists all of the species, provides an interactive map for each region and includes sound clips of their calls.  AmphibiaWeb is a great tool to discover listed amphibians (and frogs) worldwide.  For a list of what can be found in other provinces check out the Canadian Biodiversity website or the NatureWatch website. CEC’s Resource page has some identification keys.

Can we help YOU with identifying a frog or toad you encountered?

Send us your frog photo, question or frog story!

Photo Credits: In addition to our photos and those publicly available, CEC extends a special thanks to our friends who contributed to this photo collection.